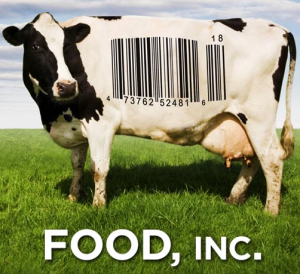 Food, Inc., directed by Robert Kenner,  finally came up in my movie queue from Neflix last week. I thought if I let a couple of years pass (the movie was in theaters in 2009) I would finally be ready for the relatively frightening message this movie delivers. This eye-opening documentary focuses on the impact of the industrialization of our food supply and the resulting consequences to our overall health. The fact is that as an American, you have a right to know what’s going on in the food industry if you’re the one buying and consuming the end product. As a country, we need to start paying attention and taking back control before it’s too late. The documentary features interviews with Eric Schlosser, author of Fast Food Nation and Michael Pollan, author of The Omnivore’s Dilemma and In Defense of Food: An Eater’s Manifesto. It also features conversations with Gary Hirshberg, chairman, president and CEO of Stonyfield Farm (http://www.stonyfield.com/) and Joel Salatin of Polyface, Inc. (http://www.polyfacefarms.com/).

I’ve been working on this blog ever since I saw the movie. My writing had turned into a rant and I had to start over several times because the last thing I want to do is come across as some radical, angry person spouting off about how the American people are being taken advantage of once again. I didn’t want to lose sight of the real issues at hand. In retrospect, I understand where the ranting came from and once you see this movie, I’m sure you’ll agree that it’s a perfectly justifiable emotion to experience.  Simply stated, I was so disgusted by what was revealed, so frightened and sad, that I thought it best to step back, take a breath, and calmly publish a list of some of the key points addressed in the documentary that were most relevant to me. Perhaps this list will draw enough interest from you, my dear reader, to provoke you to see the film and to draw your own conclusions.

1) Fast-food industry and their role in the rapid expansion and consolidation of the nation’s meat industry (which is now dominated by a few gigantic companies that process most of this country’s meat).

The growing power within the meat industry has resulted in the US Government’s “inability” to keep tight controls and regulations in place. The reality is that these companies are in close alignment with key government agencies, which is why there isn’t much political debate around why regulations are lax. That key players in government today (you’ll be surprised at who you see pop up in the movie)  have had past employment in the industries they were meant to regulate. The power is in the hands of these government workers and our fate depends on what interest they decide to represent.

2) Impact of these gigantic companies and lack of government regulation is that more and more Americans are becoming sick and dying from food-borne illness like E-coli and Salmonella.

I remember when I was attending a class in order to get my certification as a Food Safety Manager from the American Food Safety Institute.  At one point the instructor focused on E-coli and its deadly impact on the public. People at the highest risk for death are infants, children, seniors, pregnant women and those with existing health problems. The most heartbreaking portion of his lecture was his focus on the children who had died from ingesting contaminated foods.

This reminded me of the documentary’s spotlight on the devastating story of Barbara Kowalcyk and her beautiful two year old son, Kevin, who died from eating a hamburger tainted with E-coli. Ms. Kowalcyk has become a food safety advocate and has fought to help pass “Kevin’s Law” (http://en.wikipedia.org/wiki/Kevin%27s_law), which would give the USDA power to shut down plants that repeatedly produce contaminated meat. Please, someone correct me if I’m wrong, but to date, I don’t think this law has been passed. As far as I know, there is no cure for E-coli.  Some are lucky and after about a three to nine day incubation period (sudden onset abdominal pain, cramping, diarrhea, and possible vomiting) recover with no long-term problems. Others like Kevin are not so lucky and develop Hemolytic Uremic Syndrome (HUS) which is a severe, life-threatening complication of an E-coli infection.

3) I’ve mentioned this in an earlier blog; increase in obesity, type II diabetes, heart disease, and cancer are rampant in America today because of the affordability of and easy access to fast or junk food versus higher-cost fresh food. A cheap, filling meal at a fast-food chain is a more reasonable choice for a family that lives on a tight budget and simply doesn’t have the financial means to afford the rising cost of healthy food.

4) Inhumane treatment of animals and workers. The workers and the animals are pretty much treated the same. Horribly unhygienic plant conditions, with significant threats to worker safety. Humiliation is the word that came to mind as I watched workers and animals abused and disrespected.

5) Monsanto and genetically modified corn (GMO), the many uses for corn that most of us are definitely not aware of, and what this means to the traditional farmer.

Ultimately, at the end of the day we’re going to have to take responsibility for ourselves and not place the health and wellness of our families in the hands of government and business.

To sum up the words of the movie, there is hope and we can make a difference, but only if we are well informed and take responsibility. We can vote with what we buy, every time we go to the supermarket, every time a product is scanned. Buy organic. Buy what’s in season. Plant a garden. Shop at farmer’s markets whenever possible. Buy local produce. Buy from companies that treat workers, animals and the environment with respect.

For more information about the film, trailers, and what you can do to help, visit http://foodincmovie.com/

This site uses Akismet to reduce spam. Learn how your comment data is processed.

Preparing olives for brining. // Shoutout and thanks to @melissasproduce for these #raw #fresh #green #olives !!
#tbt — Fine Cooking Magazine Test Kitchen!!
Had a craving for chicken enchiladas as #summer ends — delicious!
Testing a #CroqueMonsieur #recipe - the #epic #French version of a #grilledcheese #sandwich — delicious!
Shoutout to my friends @coolina_usa and @themysteriouschef_ !! 🔪❤️
A #beautiful #sunflower in our #garden, just before the #birds destroyed it! #sun #flower #gardening #summer @gardenfolkllc
A Rubbed Kale Salad with Peaches and slivered Snap Peas — wonderful! The #kale and #snappeas are fresh from the garden; the #peaches are fresh from @thepeachtruck
A healthier alternative! Spicy chicken wings hot off the grill using only 5 ingredients: Granulated garlic, cayenne, crushed peppercorns, salt, and sumac. Rub the wings, let marinate refrigerated overnight, then grill on medium heat until cooked and crisped. Delicious enough to serve alone or with a crisp, lightly dressed blue cheese slaw.
First garlic harvested. Now drying in my basement; no vampire is safe.
Something great for the grill this weekend: bone-in #pork loin chops! Served with sweet #plaintains and a tart #kale #salad from the #garden
Hasselback Butternut Squash with Sage & Walnuts. Another food to add to the list of ‘All Things Hasselback.’
First harvest of the season. Sugar snaps!
Sometimes, there’s only one knife that can get the job done. Thank you, Coolina!
The sensual artichoke. These beauties will be steamed and served with a simple garlic-chipotle aioli.
The joy of a simple tray of Eggplant Parmigiana. The eggplant was oven-baked with no breading, then layered in the pan with just a bit of #sauce #mozzarella #parmegiana and #basil

All content ©ChefDianaAndrews.com and ©Between the Tines LLC 2022, all rights reserved, except where explicitly stated and attributed to a third-party.

Unauthorized use and/or duplication of this material without express and written permission from this blog’s author and/or owner is strictly prohibited.

Excerpts and links may be used, provided that full credit is given to the copyright holder, with appropriate and specific direction to the original content.